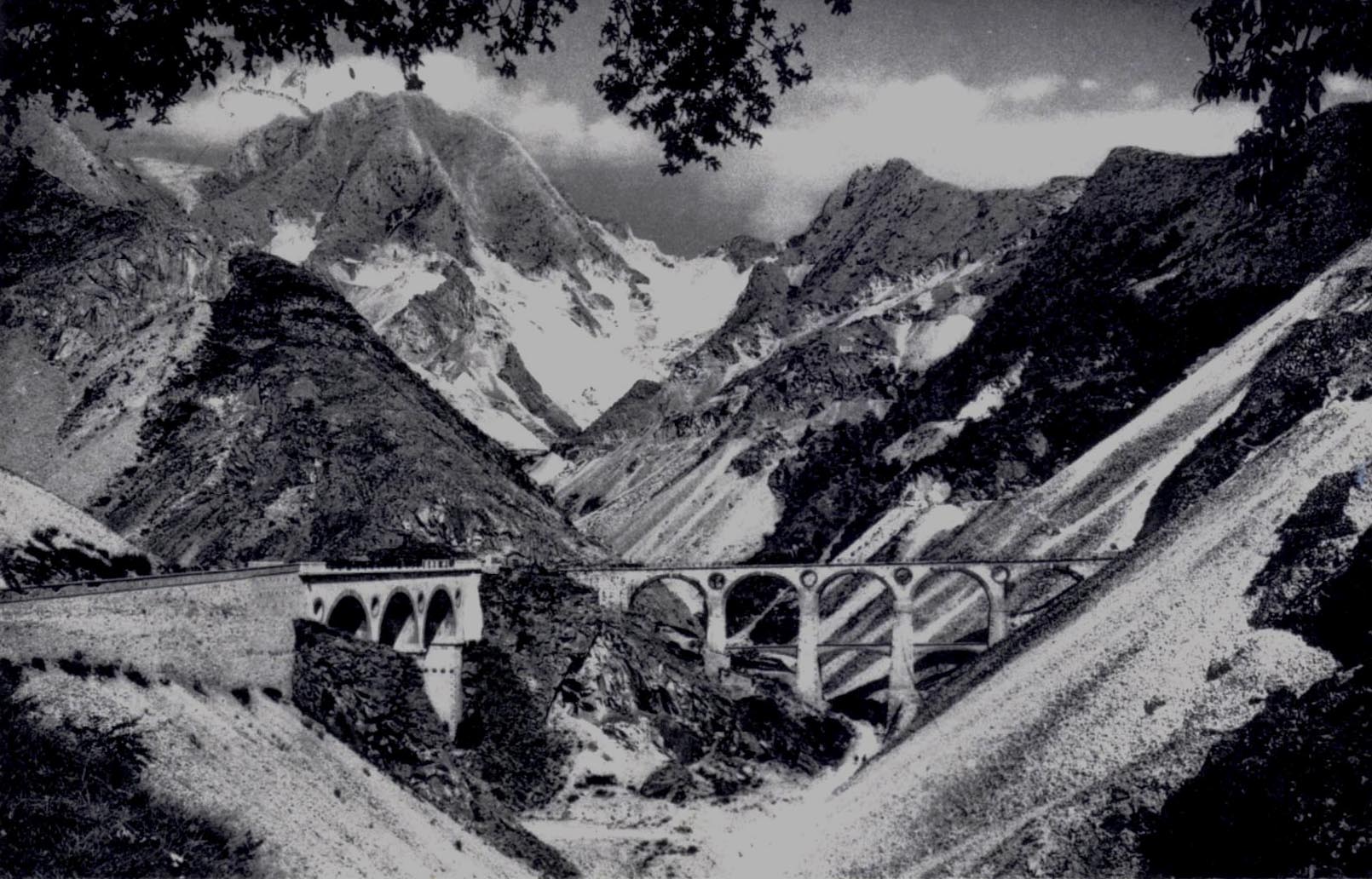 The marble railway of Carrara (local people just call it “Marmifera” from Latin “marble carrying”), is one of the first railways in the world (1876) and one of the most spectacular. The Marmifera was operational until 1964, and was one of a kind railway dedicated to the transport of Carrara marble, built on a very difficult territory from the seaside to the Apuan Alps.

“The Marmifera Private Railway in Carrara” is a documentary exhibition at CAP (Centro Arti Plastiche) in Carrara, telling the extraordinary story of the infrastructure’s building, from December 1st, 2018 to May 31st, 2019,.

The story of the marble railway of Carrara

The Marble raillway was an outstanding piece of engineering, with 16 bridges and viaducts and 15 tunnels covering 22 km with an average gradient of 4.5%. Though mostly used to transport marble slabs and blocks, the railway also offered a limited passenger service.

The 22 km track stretched from the sea to the marble quarries, crossing the city of Carrara, and it was dotted with stations, loading areas and architectural constructions, several of which can still be seen and admired today as breathtaking examples of industrial archaeology, such as the “Vara Bridges”.

The Marmifera story began when the issue of rail transport started to acquire a certain urgency following the opening of the first railway line in Italy, from Naples to Portici, in the mid-19th century. The first stretches of tracks were opened in 1876 and the railway was fully completed 16 years later reaching all the Carrara marble basins.  Though mostly used to transport marble slabs and blocks, the railway also offered limited passenger service.

The Marmifera’s story came to an end in the 1960s when the municipality of Carrara approved a plan to move marble transport from rail to road.

The Marmifera railway was so innovative and fascinating that the Lumière brothers came especially from France to film it.  That’s how the Marmifera locomotive coming out of a Tunnels in the Apuan Alps became the subject of one of the first films in history “Carrara, train sortant d’un tunnel”(1897) two years after the invention of Cinema.

The Marmifera inspired other movies such as “La strada dei giganti” (1960) directed by  Guido Malatesta, set in 1859 during the building of the railway. In the film highlight scene, the locomotive derailed and fell off the mountain.

An exhibition in progress

“La Ferrovia Marmifera Privata di Carrara” tour starts with a geological and topographical section describing the Apuan Alps incredible territory, followed by a section devoted to the history of the infrastructure’s conception and design. Alongside documents reviewing this major infrastructure’s building history, the exhibition showcases mementos, memories and photographs highlighting the “Marmifera” bound to the city, to its economy and to its inhabitants’ daily lives.

Over 50 years have gone by since the last train travelled along the tracks yet the Marmifera is sitll a very powerful presence in the city’s collective memory. Carrara has asked its citizens to make any “memorabilia” they may have available to the exhibition organisers. The material collected will be displayed in a specific section of the exhibition. It is also possible to leave oral memories in audio and/or video format, which will become part of the exhibition and of the Marmifera historical archive, thus forming an exhibition “in progress” which will become richer thanks to these direct testimonials, triggering a virtuous system of knowledge and a sense of involvement.

A Recovery of the Marmifera for Tourism?

The exhibition devoted to the “Marmifera” railway is part of a research programme involving past memory and the present day, archival material and the contemporary world with a nod to potential future developments, in facts, the City administration is working on a project for a possible recovery of part the Marmifera layout for Touristic purposes.

As part of the exhibition, a schedule of cultural guided tours will be kicking off in the spring exploring the railway’s tracks in the mountains. Visiting Carrara and its quarries on the traces of the Marmifera railway is a wonderful experience and can help to understand Carrara marble immense value under so many aspects.

“The Marmifera Private Railway in Carrara”

With the patronage of the Regione Toscana, in conjunction with Accademia di Belle Arti di Carrara, in collaboration of Museo Nazionale Trasporti La Spezia.

Carrara is the BEST CREATIVE DESTINATION of the year!

An innovative wireless charging PAD made of Carrara marble