The Chief, the otherworldly landscape of Carrara’s marble quarries 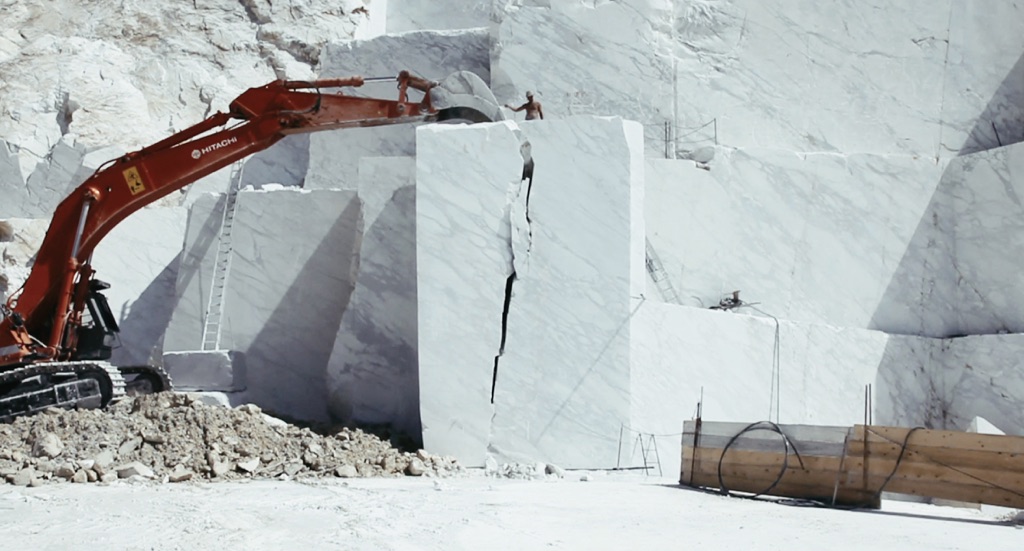 Many people don’t know where marble is extracted from, this material is a stone found in nature, but how is it extracted and transformed into the objects we love so much? We have chosen to publish the poetic short film “The Chief” by Yuri Ancarani to take you virtually to our home, to the quarries where the blocks of marble used in architecture and design are extracted.
We are in Italy, in the northernmost city of Tuscany: Carrara, the capital of marble that the whole world envies us. Here men and machines dig the mountain through an extraordinary way of communicating, an unconventional language made of gestures and signs, a code used by the chief to overcome the deafening background noise. While men and machines dig the mountain, the Chief controls, coordinates and leads quarrymen and heavy vehicles using a language made up of gestures and signs alone. Directing his dangerous and sublime orchestra, overlooking the overhangs and peaks of the Apuan Alps, the Chief acts in an absolute noise, which becomes paradoxical silence.

Who you see directing with hand singles, it actually an artist, who is handling the beginning phase of some shape, that this beautiful stone will later take.

This video is able to keep you glued to the screen, with your eyes in ecstasy following the poetic movements of a silent leader in a surreal environment, a dusty lunar landscape. The Carrara marble quarries are places so incredible and violent that you almost feel like being on set, places that have the ability to make you feel imposing in front of nature and the work of man, his gestures and his machines. A place so inaccessible as to make even more heroic the challenge that these men face every day.

The Carrara marble quarries, thanks to their particularity, are attracting directors and photographers from all over the world to shoot films such as “007 – Quantum of Solace” or the Salvatore Ferragamo group, which presented its new perfumes in a scenic setting.

Visiting these places means touching centuries of history with your own hands, you can climb up to the quarries through guided 4×4 jeeps in which they are explained and shown how to cut the “banks” of marble that can weigh up to 120 tons each, how they are laid down on the ground and taken out.

The film is produced by NO Gallery (Milan), Gemeg (Carrara), and made in collaboration with Deneb Media.