About Carrara• Made in Carrara 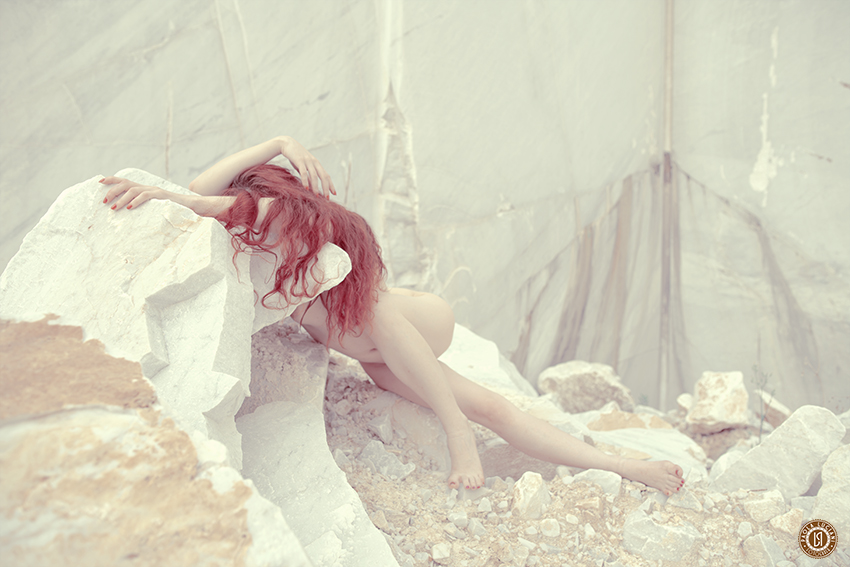 The photographic project “Candore Violato” (violated candor) deals with the themes of traumatized femininity and wounded Nature through images taken in a marble quarry on the Carrara mountains in August 2018. Photographer Paola Luciani pays a tribute to women victim of violence: the subject is Kiara Aradia, writer and model, a woman with deep wounds like those inflicted to the Apuan Alps by centuries of man activity.     Pure marble welcomes the naked body of a woman, as in a mother’s womb, the cracks on the walls break the absolute white as well as the red hair of the girl who lives this encounter abandoning herself completely between the dust and the debris of the violated mountain. White predominates over everything, but it’s a white that frightens and softens, silent and oppressive as a warning to the observer. Nudity is without stereotypes, the woman does not appear sensual nor available as the naked body merges with the white of the marble. Nudity is noticed at a later time, because the human eye tends to be captured by the red color of the hair. Not only the photographs are set in the marble quarries, but they are also printed on white marble slabs, and the result is powerful.     Paola Luciani‘s Candore Violato is an exhibition not to be missed in Carrara to celebrate 25th november, the United Nations’ (UN) International Day for the elimination of violence against the women, to beat violence with culture. The project includes the presentation of  Kiara Aradia’s book  “Il mio regno per un cavallo” (my kingdom for a horse), written to tell the harassment suffered in a riding school when she was little more than a child. You can see “Candore Violato”  in Carrara at  Polo delle Arti di San Martino, the venue of the Carrara Sculptors Cooperative.
Share on Facebook Share
Share on TwitterTweet
Share on Pinterest Share
Share on LinkedIn Share
Print Print
authentic natural marbleCarrara marbleCarrara sculptors cooperativeExhibitionsmarble quarriesprint on marble

CANOVA The journey to Carrara: an immersive experience in the artist creative process